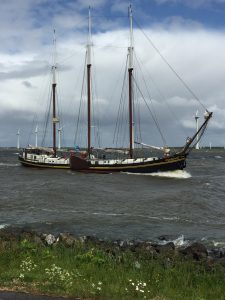 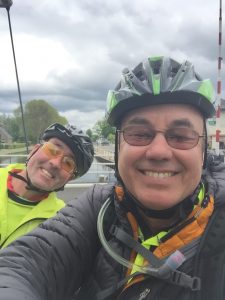 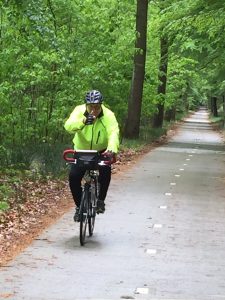 We are now half way through our cycle ride to Hamburg. As a person with no previous cycling experience I am glad to have got this far. It has been really cold and at times the combination of rain, ice cold headwinds and bottom numbing paved (brick) roads has made for some long and tough days. However today was much better and we headed East from the windy Dutch coast towards the German border. We managed 54 miles in about 7 hours. John keeps stopping to take photographs and insists that he saw a three headed goat. Paul is the steady solid dependable rider who gets on with it. Famously after battling with a section with 20mph winds from our left side which nearly blew me in the water a couple of times John commented that is was a tough ride but Paul replied that at least it was not a headwind and it had been ” helpful at times!”  Paul gets on with the job.John is enthusiastic and busies himself with plotting routes, waving large maps around in the gale force wind and speeding off into the far distance only to stop for photos, or map reading, or something, allowing Paul and I to catch him up and overtake him. However John does get faster when we are nearer food.

We are all impressed with Dutch agriculture, the fields are immaculate and the potato fields defy belief in that the ridges are perfect and completely symmetrical. The cows are friendly and all the Dutch people speak excellent English. We have seen real working old thatched windmills, lots of water, bridges, canals and some lovely restored old barges and boats. One really annoying fact is that all the Dutch cycle faster than us and we as yet have never overtaken another cyclist. John says it’s because they are only going a short distance but I think they have secret batteries.

We are very dependant on meeting up regularly with our excellent support team of Hilary, Bill and Bob. They have really looked after us and provided hot food, moral support and encouragement. It’s been good to see them parked up and waiting for us and to talk some sense for a while rather than listen to John droning on.  That’s not really fair on John, he has done some difficult navigation when the cycle path disappeared or the weather made some of the sea shore paths really hard going.  His biggest con trick is to convince me to join the trip with stories of gentle cycle rides through small idyllic country lanes and maidens with flowers in their hair walking the cows to lush meadows!

Onwards to Hamburg. We look forward to our German friend joining us tomorrow.